YKK Vietnam has grown in Vietnam where the garment industry has continued to expand. ABeam Consulting (Vietnam) supported the introduction of RPA for YKK Vietnam. It is understood in Japan in relation to “work style reform,” but their purposes are quite different. We interviewed president of YKK Vietnam and operations manager, about the true aim and effect of introducing RPA in the Southeast Asian market where labor costs are low.

From a management perspective, it can be said that employees have become easier to work.
The business is expanding at an unbelievable momentum. However, when I looked back at last year, I felt that the fact that there was no trouble, even though there was so much performance, was largely due to RPA.

Vietnam market is growing rapidly as the leading base in Asia

Vietnam market is growing rapidly as the leading base in Asia YKK Group has two major businesses, fastening products and architectural products. They have offices in 72 countries / regions, and six of them are in charge of management in North and Central America, South America, EMEA (Europe / Middle East / Africa), China, Asia and Japan. YKK Vietnam was established in 1998 with fastening products as a core business. Since 2010, the geopolitical risk has increased, and the younger generation has left the manufacturing industry. However, as the movement of “China Plus One” accelerates against the backdrop of yen appreciation and other issues, it has emerged as the leading base to supplement the Chinese region. Their growth over the past decade has been remarkable.

“I was assigned in 2009, Is the scale of the current business about 10 times that of the time?” Toru Shikita, President and Representative Director of YKK Vietnam, says. YKK has factories in the north and south of Vietnam, Ho Chi Minh and Hanoi, and also opened an R & D center in April 2018. In addition to processing exports, they are conducting integrated planning, development, manufacturing and sales of European and American sports and casual wear manufacturers, those have entered Vietnam in this field in recent years.

We want to make employees happy by stopping simple work

YKK Vietnam, which has continued to expand its production system in response to increasing demand in the garment industry, has streamlined its operations to further strengthen its supply capabilities and improve its services. In October 2018, they decided to introduce RPA (Robotic Process Automation).

Mr. Shikita looks back on the process as follows: "Fasteners are typical low-volume, high-variety products, and product varies greatly depending on the demand and application. In addition, the industry has many analog processes. Orders from customers may be received by fax or verbally by phone.Before I moved to Vietnam, I was in Shanghai, but when the market was growing, a pile of purchase orders was piled up overnight on the desk. Local employees entered it into the core system. They were talented people who graduated from junior colleges and universities and joined Japanese companies with dreams and hopes, but during the busy season, they were busy with simple work. I wondered, “Even though there were so many orders that I couldn't be judged. Is this good?” About five years after I was assigned to Vietnam, it was the same situation as before, and I wanted to find a good way.

When received the order, he said it took a few days to enter the company's core system, and four to a week at peak.

Today customers expect short delivery times naturally, however, there were a lot of backorders. But we couldn't force employees. I gathered information for solution, and finally I found RPA. He confessed. In Vietnam, the shortage of human resources is now a major issue. The competition for high-performance human resources is fierce and the mobility of human resources is increasing, so the viewpoint of ES (employee satisfaction) is rapidly emerging. "First is for the happiness of employees. Therefore, in the introduction, “We clearly declared to employees that RPA is not a means of reducing staff.” He said.

Business analysis was conducted before the introduction of RPA, but about 60% of all work was simple tasks such as input.

Although it is a large and growing company, it is difficult in the future to keep hiring human resources who can only do simple tasks, so streamlining operations by automating simple tasks was an urgent issue.

On the other hand, at that time RPA was a buzzword and we didn't know how much effect it would have. To be honest, the introduction was only a trial. Mr. Yoshikazu Mito, the operations manager of the company who led the RPA implementation project, says. ABeam Consulting (Vietnam) supported this project.

A typical business that succeeded in RPA is the above-mentioned order entry (order entry). "This was the work of copying and pasting what you received with Excel from the customer and entering it into the core system. But the problem is the data specifications and the contents of Excel are completely different for each customer. Some says that it is only necessary to request creation in a unified format by YKK. We are only suppliers, so we can't request that much. Therefore, we accepted a purchase order with a different format and processed it by RPA.” Said Mr. Mikami.

We also automated a “delivery note” that records what was shipped, and export and import documentation. By using the OCR tool together, text information can be read from PDF. "We automate the task of obtaining information from internal and external systems and creating documents.” Mr. Mito explains the project.

In the first 10 weeks, ABeam Consulting (Vietnam) introduced about 3 robots themselves, and they took over subsequent developments to YKK Vietnam. The project is less than a year old, but 50 robots are already in operation.

"When you put in a new one, the staff will get excited, but the heat will get cold over time. But from the beginning, we don't want to slow down RPA implementation. So, I declared the continuation of the project as an executive. In addition, we set a time for reporting on the utilization status of RPA in each department at the monthly sales conference. we created an atmosphere that I continued to use like this.”, said Mr. Shikida.

A strong commitment from executives has increased the self-propelled power of RPA implementation projects. 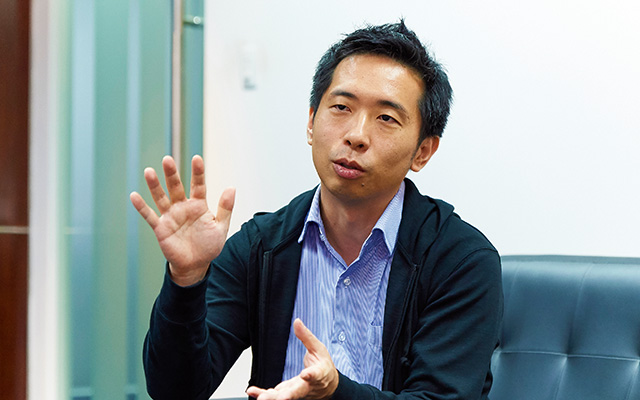 ABeam Consulting led the introduction from our perspective. As for doing business with Vietnamese people, ABeam Consulting is practicing it, and we are grateful for the support that gave us the key points.

The RPA tool selected by YKK Vietnam in these projects was a UiPath solution. Mr. Mito says why. We have ever used products of other companies, but those interfaces were designed for engineers and difficult for us to use.UiPath is more user-friendly, and the development methods are publicized on YouTube etc., and it was easy to learn by watching them.

There is a shortage of IT human resources in the Vietnamese labor market, making it different to hire workers with high IT literacy. Therefore, we chose UiPath, which can be developed without much IT literacy. Regarding ABeam Consulting (Vietnam) accompanying the introduction of RPA, both commented as follows: “ABeam Consulting led the introduction from our perspective. As for doing business with Vietnamese people, ABeam Consulting is practicing it, and we are grateful for the support that gave us the key points.” / Mr. Mito

"RPA has been introduced to cope with this rapidly changing era, but I think it should be continued from now on, not the end. However, if we proceed only in the company, the field of view will be narrowed, and we may be left behind in the times. I hope ABeam Consulting will continue to review the progress and check the direction in which we are moving.”/ Mr.Shikida

YKK Vietnam is currently preparing to hold a robot competition to promote the introduction of RPA. “The primary purpose is to make RPA more understandable by employees who are users. Traditionally, RPA was developed from top-down business analysis. Now that we've got it, we decided to hold this competition because we wanted more requests from users.” / Mr.Mito.

Employees who entered the competition will have training required for RPA development, and will perform job analysis and robot requirement definition by themselves.

The aim is to automate their simple work and shift the work to something more valuable.

Mr. Shikita says about the effects of introducing RPA, "From a management perspective, it can be said that employees have become easier to work.

The business is expanding at an unbelievable momentum. However, when I looked back at last year, I felt that the fact that there was no trouble, even though there was so much performance, was largely due to RPA.” If they want to increase production capacity, they can increase the equipment and extend the operation time. However, if the indirect operations at the previous stage leading to the factory were stagnant, it cannot be utilized to satisfy the production capacity. RPA streamlines its indirect operations.

YKK Vietnam is going to further expand its business. And we want to expand the market not only in Vietnam but throughout the Indochina Peninsula. By doing so, Mr. Shikida, who leads YKK, wants to give employees more opportunities to play an active role.