Credo: "No Attack, No Chance" 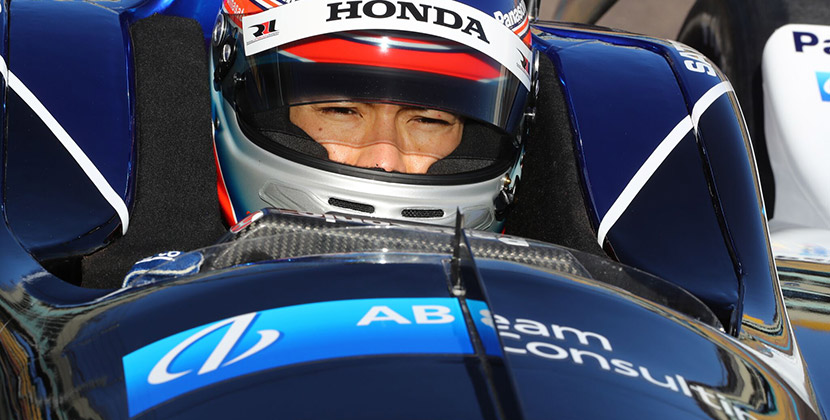 A first-rate driver from Japan who has stood on the winner's podium for both the Formula 1 and IndyCar Series, the world's top two formula car racing series.

Born in Tokyo on January 28, 1977. Sato began bicycle racing when he was in high school, garnering a record of performance that included victories in inter-highschool competitions and All-Japan Student Championships. Through it all, he never lost sight of a dream the seeds of which were planted when he first saw an F1 race as a young child. In pursuit of that dream, he entered the Suzuka Circuit Racing School (SRS-F) in 1996. Following his kart-racing debut, he began F1 racing from 2002 through 2008, during which he achieved victory in the 2004 American GP. Since 2010, he has been active mainly in the United States, where he races in the IndyCar Series.

The IndyCar Series is America's most popular formula car racing competition. It culminates in the Indianapolis 500, the world's fastest circuit race and one of the world's Big Three automobile racing events, together with the Formula 1 Monaco Grand Prix and the 24 Hours of Le Mans races. The IndyCar Series includes a total of 17 races each year in the United States and Canada, major events attended by crowds of more than 400,000. Broadcast in 147 countries, its popularity is firmly established.

The series features a wide variety of racing courses, including racing on F1 “road” courses, “street” racing on public city streets, and “oval” race track circuit competitions. The richly varied spectacle includes pitched battles at speeds of up to 350km/h.

Out of concern for the environment, corn-derived ethanol fuel is being used for the first time. These races showcase the most sophisticated state-of-the-art motor racing technologies in North America.

The course is the battlefield! Together with the driver, harnessing the power of data analysis.

Through our partnership with this top-rated American racing team, ABeam Consulting is able to marshal our knowledge and experience with the latest digital technology to support Sato. Our own analytical tools enable state-of-the-art driving analysis, fault forecasting, and actual racing data collection and analysis to help Sato's team achieve optimum performance.

“You can change anything, even the impossible. ... This experience gave me the ‘No Attack, No Chance’ motto.”

With the thrill of Takuma Sato’s Indianapolis 500 victory last May 28 still fresh in our memories, we welcomed the champion Formula One racer as a guest at the integrated Enterprise Solution (IES) general meeting on February 16. Sato, with whom ABeam Consulting Ltd. signed a partnership contract in April 2016, related his development into a world-class champion, encouraging us all as we train and develop next-generation leaders at the IES who will lead us in designing new services/solutions and further accelerating our globalization.

“You can change anything, even the impossible. ...
This experience gave me the ‘No Attack, No Chance’ motto.”

From his earliest childhood, Takuma Sato said, he developed a deep interest in anything with wheels. While his preschool classmates played on the playground or in the sandbox, he preferred to ride around on a kick scooter all day long. He described his first fascination with motor sports when his father took him to the Formula One Japanese Grand Prix in 1987: “A crowd of more than 100,000 spectators and their excitement, and machines driving at enormous speed. Everything was beyond my imagination. I was only 10 years old, and was so stunned by the spectacle that I couldn’t move an inch. At that very moment, I discovered my dream-- I would become a driver, maneuvering one of those monstrous machines.”

From then on, Sato had become enthralled with motor sports. But he was still only an elementary school kid, with no real idea how he could become a Formula One racing driver. To fulfill his need for speed, he got hooked on bicycling, a vehicle readily accessible to him and which could provide him with a means of expressing his eagerness to be a F1 driver. He reached a life-transforming point when he was a third-year high school student. At the time, he wanted to earn a sports scholarship to enter university. But, not taking part in any school club activities and completely lacking experience in interscholastic athletic competitions, his chances at a scholarship appeared nil. What is worse, his high school did not even have a cycling club-- a prerequisite to interscholastic competition.

He beseeched his high school to start up a cycling club, only to be told that he had first to create and join in a preliminary cycling circle for a year to establish a track record of activity. But he was set to graduate before he could establish a club by this route. The catch 22 would have effectively barred him from competing in cycling races if it were not for his persistence. Undaunted, he insisted so tenaciously on negotiating the start-up of a school cycling club that teachers began to empathize with his inexhaustible enthusiasm. He eventually succeeded in persuading the school to make a special exception, enabling him to establish a one-man cycling club.

“At that moment, I realized that my thoughts alone were not enough to prod people into action. It was because my teachers helped me that I was able to start the cycling club. I also realized the crucial importance of never giving up, of telling people what you believe enthusiastically, and of gaining allies. This was the moment in which I understood that if I continued to take action in this way, I would be able to change the impossible to my advantage. I could see how situations and people’s feelings changed.”

Sato got what he wanted by adhering to his motto “No Attack, No Chance.” As he realized that he would never be able to improve his cycling skills alone, he asked other powerful high school cycling teams to let him join in their training camps, which was unheard of at the time. In the end, he not only achieved his goal of competing in interscholastic cycling races, but emerged a victor. Just six months after being told that he had no cycling club to join, Sato managed to win the interscholastic championship. Living this intense success story helped him forge a path to becoming a Formula One racing driver: “Winning the national championship was the best result I had envisioned. It was a dream come true. Just six months earlier, I couldn’t have imagined that I would be able to fulfill this dream. On top of that, I wasn’t even the fastest or the strongest racer in the final. I just plucked up the courage to attack what seemed to be the impossible, and it gave me a chance. What I went through has become my emotional mooring. That very experience has given me the ‘No Attack, No Chance’ spirit.”

“Think things through if an orthodox method does not work. ...
You can open the way for success by taking action strategically”

“In the winter of my first year at university, when I was thumbing through a racing magazine, I found an article about the Suzuka Circuit Racing School. The article was about a scholarship that would be granted to the trainee who achieved the best results during the eight-month training program provided at the school. I was very excited. I thought, ‘I’ve finally found the way to become a racing driver!’ In the racing world, almost all racing drivers have received specialized education since they were small children. The racing world is hard to enter for those who have not received such gifted education from the earliest age. With this, I felt I could grab a chance for myself.

“But they administer only documentary examinations for the selection of trainees, and the competition was so severe that only one in 10 candidates were accepted to the school. What is worse, I was reaching the age limit, and had no illustrious career or race experience at all, so the chance of me receiving acceptance was very slim. I had to figure out a way to open the path to entry into racing school. During the question-and-answer session at the explanatory meeting held for applicants, I begged the selection committee members: ‘Please give me a minute to tell you about my story.’ If they gave me a chance, I figured, I could make something of it. I bet everything on that. After the committee members held a brief consultation with the school administration, they announced that they had agreed to hold private interviews with any candidates who wished to tell their personal stories. Inside the hall, bewildered looks came over all the candidates’ faces as a mood descended-- something like, ‘What the hell?’ I was the only one with a great big smile on my face. In the interview, I explained to the interviewers all the enthusiasm I had for becoming a race driver. The result was that they accepted me, and I was the only trainee who had no experience in motor sports. That was the moment that opened the way for me to become a Formula One racing driver.”

Sato went on to win the scholarship after entering the racing school. Then he moved to England to become an F1 driver. He is now racing around the world as a Formula One driver. Last year, he accomplished a historic achievement by winning the Indy 500. He never gives up. He hammers out strategies/processes that win, and sees them through to completion.

But that’s not all. Sato draws others in with the enthusiasm by which he opens the way for himself. As he related how he makes his way through using the “No Attack, No Chance” creed, and how he wins out in a competitive world, every IES member felt emboldened by this real-life experience.

“The more dreams you have, the better. Even if one of your dreams seems too big to realize, to the point where you have no idea how you can work out a plan to actualize it, you should still have that dream. Because dreams like that make your life fun. If you cannot imagine how you can make it come true, you should set a series of easy-to-fulfill objectives on the way to realizing the dream. Achieve these objectives one by one, and break through your limitations. If you continue to challenge your limits, you can make your wildest dreams appear closer to reality, and before you know it, your dreams actually start happening. And even after you make your dreams come true, you should keep challenging your limits toward the next big dream. In fact, I have set myself the goal of winning the Indy500 again in 2018, a big dream. In the history of the Indy500 spanning over 100 years, no Japanese racer has ever won the Indy500 a second year in a row. That is why I want to achieve it! I urge you to take on the ‘No Attack, No Chance’ credo, and challenge your limits.

Sato holds up the very helmet he wore while achieving his historic feat, becoming the first Japanese driver to win the Indy500.

“This is the helmet I was wearing when I won the Indy500. It still bears the marbling of grime, grease and bugs from the race. I’m going to leave this helmet uncleaned because I want to look at it to encourage myself when I start feeling I can’t go on anymore as I take on challenges to make my next big dream come true”

Our attention remained riveted on the helmet redolent of the excitement of Sato’s Indy500 victory. He points at the blue ABeam Consulting corporate logo.