Wacoal establishes new materials production companies in Thailand, set to become business expansion bases in the ASEAN region.
Implementing IT Due Diligence in a short timeframe for an M&A carve-out.

“As a business, we have just reached the starting line. Our highest priority is to establish a system environment that supports a plant infrastructure in which our employees can work easily, and which supports the machinery and business required for quality improvements.
We intend to generate results within the first three years.”

The Wacoal Group incorporates materials production and supply functions, for which it had previously relied on outside companies, into its own supply chain

Wacoal Holdings Corp. provides advanced products to markets worldwide, and continues to be a pioneer in the field of innerwear culture. With its corporate mission stating, “We will contribute to society by helping women to express their beauty,” the Wacoal Group comprises 58 subsidiaries and nine affiliated companies, developing its business as a unified whole. As a manufacturer, the Group has continued to pursue quality in its products, and this quality is the very identity of the Wacoal Group. It is no exaggeration to say that the trust customers have in the Wacoal brand today is sustained by the high quality of the Group’s products.

The global strategy of the Wacoal Group is of particular note. Its overseas business, which focuses on the key markets of the United States, Europe, and China, achieved sales of 51.869 billion yen (an increase of 7.8 percent year-on-year) for the year ending March 2016.

Aiming for further growth, the Wacoal Group has now set its sights on the Asian market as a whole, and India and the ASEAN region in particular. In order to dominate this market, it is essential that the Group establish a supply system for more price-competitive products. Takuya Miura, head of International Headquarters and an executive officer at Wacoal Corp., a production and sales subsidiary of Wacoal Holdings, noted: “We have previously relied on outside companies for the production and supply functions of our materials. By incorporating these functions into the Wacoal Group supply chain, we hope both to achieve stable production of final products and to reduce costs.”

In order to carry out this plan, the Group established two new companies in Thailand: A Tech Textile Co., Ltd. (A Tech) and G Tech Material Co., Ltd. (G Tech).

Wacoal Corp. values ABeam’s extensive track record—which ranges from IT Due Diligence to the implementation of SAP both in Japan and abroad—and its ability to respond to problems flexibly.

The creation of A Tech and G Tech secured materials production functions in Thailand for the Wacoal Group, and enabled it to establish a continuous value chain from research, planning and design to materials, manufacture and sales. Connections between Japanese and overseas production bases and sales networks were strengthened as a result.

However, one major issue with the M&A was how to deal with A Tech. A Tech was established through the acquisition of a carve-out from TPC and, for this reason, required the “safe excision” of people, things, and information. Compared to a standard corporate acquisition, this entailed the management of a wide range of issues, thereby increasing the complexity of the M&A.

ABeam Consulting was chosen for its excellent track record in IT Due Diligence, IT master plans, global system integration projects, and SAP implementation both in Japan and overseas.

Miura commented: “The decisive factor in our choice of ABeam was the fact that they had a local subsidiary in Thailand—ABeam Consulting Thailand—and had consultants who could speak Thai. Wacoal has executed M&As in the past, but we had never experienced such a complex IT Due Diligence as this. It was extremely encouraging to know that the project would be managed directly in Thailand rather than remotely from Japan.”

IT Due Diligence Process Flow 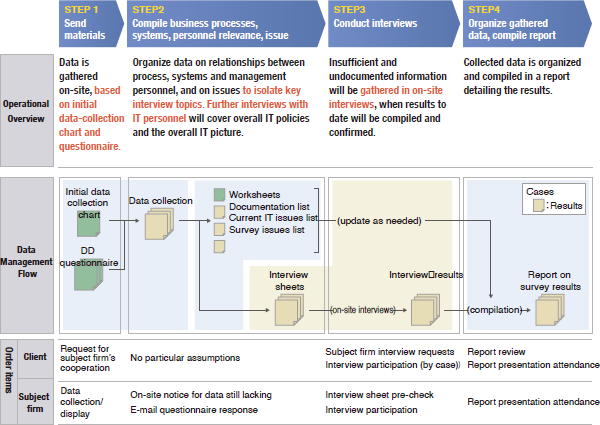 Business is scheduled to begin at the new companies in just 10 months How will the system transfer be completed under such a tight timeframe?

However, the working groups were only set up in May 2015. A Tech was scheduled to begin operating on February 1, 2016, leaving a tight schedule of just 10 months in which to complete interim system support and execute the transfer to a new system. Working back from the deadline, this meant that IT Due Diligence would have to be completed by the end of June—to all intents and purposes in just a month and a half.

Yusho Nishiuchi, the executive director who oversaw the IT working group and who now works for G Tech, recounted: “The project had a limited number of members, and I was in charge not only of IT but also of personnel and business. For this reason, I could only allocate a limited amount of time to IT. Moreover, since I was a layman with regard to IT, when it came to deciding the schedule, confirming the survey items and all other IT-related matters, I had no idea where to begin. With their wealth of experience, ABeam clarified the points to examine; then, in a short timeframe, they started the project, submitted an interim report and subsequently a final report with no delays, and made clear what closing issues there would be. They alleviated my fears with regard to IT, and emboldened me to move forward with the project.”

Utilizing ABeam’s templates and knowledge, Wacoal Corp. implements IT Due Diligence effectively in a short timeframe

Nishiuchi and his colleagues had extensive discussions with the consultants at ABeam Consulting Thailand; they settled on a policy which maximized ABeam Consulting’s IT Due Diligence templates and knowledge, and began gathering information and conducting local interviews.

Wacoal Corp. managed to elicit the full cooperation of stakeholders including Thai Wacoal, SPI, and TPC. Consequently, it was able to smoothly identify a number of elements, such as the overall picture and policy of the system, issues with the current setup, the relationship between work processes and system operation personnel, the asset value of the system, and the costs and risks of system integration.

Kota Hashimoto , from the Business Management Department of Wacoal International Headquarters’ Business Management Division, which supported the project from Japan, said: “I oversaw the personnel and general affairs working groups, and the fact that things would not proceed according to schedule caused me great difficulties. In addition, it was impermissible to point the finger at the Thai members, for whom a show of respect was crucial even in such adverse circumstances. I was deeply impressed by ABeam, who had a thorough knowledge of such Thai customs and were able to firmly control the schedule.”

The PMI process followed. In order to reduce the risks and costs associated with the establishment of the new companies, ABeam drew up a temporary solution based on the results of the IT Due Diligence that minimized modifications to the system, and so completed the “Day 1” project.

Nishiuchi summarized the course of action so far: “Our target as we approached the finish line was ‘to reach a seamless operation that was no different to the existing system.’ ABeam also fully understood this goal, and proceeded by focusing on the points which required modification. In particular, ABeam’s local staff built an outstanding relationship with all those involved; even though we had a large number of in-house applications which impacted on SAP and necessitated a large number of points to be checked, they persevered with adjustments and modifications. I believe that, thanks to ABeam, we were able to make progress more smoothly and with greater peace of mind than other subcommittees.”

Systems commence operations on schedule and without incident.
The process begins for a full system integration aimed at permanent measures.

On February 1, 2016, the system that was transferred to A Tech went live without any major issues when the company commenced its operations. End users were able to go about their work in the same way as before the M&A without realizing changes had taken place, and managed to complete the company’s monthly closing of accounts problem-free.

“At the time,” said Miura, “I was groping in the dark for ways to begin with the complex IT Due Diligence effort. The fact that the new companies were able to commence operations without delay, and the fact that the Wacoal Group has been able to take a fresh step forward, is an enormous, irreplaceable success. ABeam oversaw the IT side of the project from start to finish, and provided accurate proposals and support for solving problems—I am extremely grateful to them.”

After the transfer price of the business inherited from SPI had been formally settled, between July and August 2016, the assets of A Tech’s system were registered. Consequently, the “Day 1” project, which focused on IT Due Diligence and temporary system solutions, was brought to a conclusion.

Of course, this by no means indicates that all work has now been concluded. It is no exaggeration to say that the real work starts now. Over the next three years or so, the Wacoal Group plans to consider and implement system integration and modifications with the aim of establishing permanent measures for the new companies.

Tetsu Ogura is an executive director at A Tech who took the system over from Nishiuchi. He spoke of his enthusiasm for the project: “As a business, we have just reached the starting line. There are a great many things we have to do, such as improving product quality, enhancing our capacity for development and sales, and establishing a management division system. However, our highest priority is to establish a system environment that supports a plant infrastructure in which our employees can work easily, and which supports the machinery and business required for quality improvements. We intend to aggressively invest while maintaining a good balance from a management perspective, and to generate results within the first three years.”

Miura stated that one of the company’s goals was “to achieve sales of 10 billion yen in India in 10 years’ time.” He explained: “In order to achieve this, it is essential we enhance our supply chain to comprehensively cover the ASEAN region. We intend to stabilize materials production at A Tech and G Tech as soon as possible, and begin supplying materials to a garment factory in Myanmar which is scheduled to commence operations in September 2016.”

Accordingly, there is a possibility that further system restructuring will be required at A Tech and G Tech. Through this project, ABeam Consulting has come to fully understand the Wacoal Group’s business and, going forward, will strive to continue to meet their expectations.