Connecting entire organization to tackle competitive structures that are being destroyed 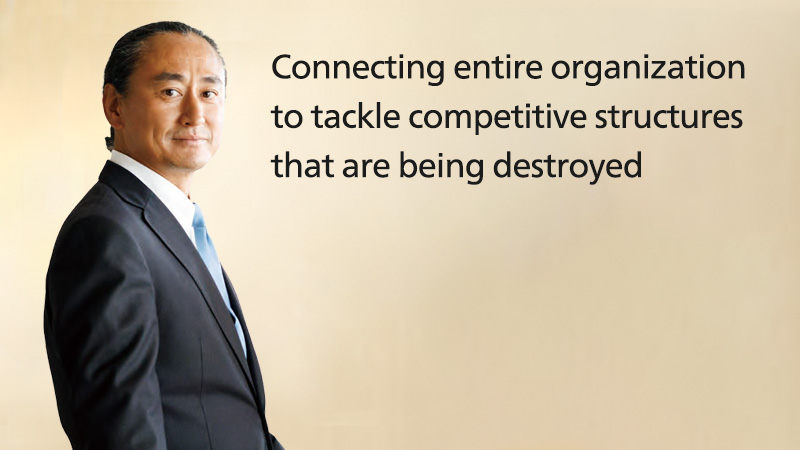 Disruptors (creative destroyers) who construct business models in the era of digital transformation based on mobile technology, cloud, and social media are causing a major change in business competitive structures. In order to respond to these changes, organizations of the entire group must connect, and make stronger connections with customers.

Companies first fully introduced computers as a mission-critical system in the second half of the 1980s. At that time, systemization was progressing among separate frameworks for each business process, including purchasing systems, accounting systems, and sales systems. It was the era of “digitalization” in which analog processing switched to digital processing.

Since the second half of the 1990s, companies implemented digitalization by switching to entirely integrated frameworks such as ERP, which led to an era of working with frameworks with consistent business processes. However, while digitization may have connected single organizations, groups as a whole, including subsidiaries and affiliates, were not necessarily connected.

Since approximately 2010, companies have heralded the need for digital transformation (DX), which was when many companies first realized that they had not actually been properly digitalized or that the group as a whole was not connected.

For example, if products, accounting items, and other codes differ depending on the country where the business is deployed, the company cannot quickly and precisely understand the condition of stock or level of profit. Today, we live what one could characterize as the “Pre-digital transformation era”.

Meanwhile, if we look at the consumer environment, the era of the Internet was unveiled in the 2000s.

High-speed communication network environments spread widely among individuals, and anyone, anywhere could connect at any time. In constructing web systems, companies followed suit, which indicated the early stage of contact between individuals and companies.

Mobile technology, the cloud, and social media were formed among individuals in the 2010s, and again company systems were one-step behind the so-called wave of consumerization.

One of the major reasons for the delay in digitalization and the embodiment of its imperfections is the progress of globalization.

Since the 1990s, the expansion of Japanese companies into other countries has accelerated. As the destination markets increased, production bases also increased. Deploying a system made in one country into another country led to the extension of various systems. Now we often hear that “before we knew it, counterfeit systems had mixed in with original systems, which led to the destruction of standardization and unity of codes”, and “while various companies became part of the group due to M&A, their frameworks were varied”. Either way, because of overseas expansion, many companies have become aware of the imperfections of digitalization.

When countries work according to different frameworks, even if one wants to check the figures by month or by week, the point of consolidation may be two or three weeks in advance. Of course, this makes quick decision-making difficult, and speed management is impossible.

So, what can be done? It is necessary to have a framework that integrates the same codes in the same system infrastructure. As such, we need to connect digitally. Then, when we are connected digitally worldwide, and digitalization is a reality, we can progress to the next stage, which is digital transformation. Japanese companies today need to reach this stage as quickly as possible.

However, the digital transformation stage is also the stage of disruption (creative destruction) that competes with speed management.

Emerging companies known as disruptors destroy conventional competitive structures, such as Uber Technologies, Airbnb, and, from Japan, Mercari. In the case of Mercari, it is the first Japanese venture company to become a unicorn company (unlisted venture companies that have a valuation of more than 1 billion dollars), which has already expanded to the United States. These companies have quickly taken over the market. Companies are requiring a rapidly accelerating speed of management.

The common theme among digital transformation era disruptors is the construction of a business model based on an environment in which mobile technology, cloud, and social media have existed since the founding of the company. This has rapidly accelerated their management speed and given them very strong connections with customers.

So, then, what can companies that conduct regular business activities with conventional enterprise systems do to counteract the management speed and the strength of customer contacts of disruptors?

I believe the cloud is the answer to that. Even if one considers expanding or upgrading existing enterprise systems, it cannot keep up with digital transformation era management speed. However, with cloud infrastructures, companies can continuously provide the latest technologies and best practices, which is an astonishing cycle. Making full use of this enables management to compete with the speed of disruptors. Globally “connecting” enterprise systems using cloud is a major key to growth in the future.

The connection between the entire group that combines cloud with enterprise systems will be the competitive edge in the digital transformation stage in which speed management is required. After that, enterprise systems and consumers will be connected so that users can order individual products that they like, and the systems can immediately begin producing and shipping them. As such, the entire supply chain will move toward being connected.

In any case, I want to provide support so that even one more company can energetically move forward to the digital transformation era.