Unable to extract the full potential from SAP ERP

Since its establishment in 1934, FUJIFILM Holdings Corporation (hereinafter “FUJIFILM Holdings”) has contributed to society in the fields of images and information. As part of what the company itself referred to as its “second establishment,” the entire FUJIFILM Group made the shift from a company whose core business was photographic films to a company that would continue to grow in multiple new businesses. At present, the company operates in three key areas: Imaging Solutions, Information Solutions, and Document Solutions. FUJIFILM Holdings has actively engaged in exports since 1938, before the start of World War II, primarily to South East Asia. In 1956, at the same time as establishing its exports division, the company expanded its overseas bases and grew its exports business. In the 1990s, it established production plants across China.
In order to claim the leading share of the Chinese market—a market that has grown rapidly—FUJIFILM (China) Investment Co., Ltd. (hereinafter “FUJIFILM (China)”) has been tasked with investing, selling, and integrating the Chinese operations of the FUJIFILM Group since 2001.

As of 2016, FUJIFILM (China) is focusing on its medical and imaging businesses. In particular, its Instax Mini10 instant camera has proved a huge hit with the younger generations in China. In June 2015, the company opened a “Wonder Photo Shop” selling Instax Mini10 cameras and digital cameras near People’s Square in Shanghai. Kenji Tsuji, manager of FUJIFILM (China)’s China IT Center, commented: “We basically sell the same products on the Chinese market as we do in Japan. However, there is a difference in the use of X-rays, which in Japan are now almost entirely digital but are still largely film in China.”

The FUJIFILM Group operates using defined standard business processes in its supply chain, such as sales, stock management and purchasing management, and these are implemented in all of the Group’s bases across the world. However, due to China-specific problems faced by a majority of Japanese companies, these standard business processes have not been comprehensively implemented at FUJIFILM (China). These problems are twofold: the high extent of job mobility, and the fact that duties are not effectively transferred to replacement employees. When a member of staff is replaced, the new employee works hard to increase his or her own efficiency and to improve his or her own productivity. However, this means that business processes become increasingly more individualized, and these individualized business processes conspire to decrease the efficiency of the company as a whole. In addition, since these employees input data according to their own individual standards—which differ from the predefined standards of the Group—the decision-making of the management is delayed. The business processes which these employees had individually adjusted heightened barriers to personnel change.
According to Tsuji: “In Japan, I thought I could manage supply and demand by retrieving SAP ERP data from bases all over the world. However, this presupposes that data can be accurately extracted, but this was not the case in China. Ever since I transferred to China four and a half years ago, I have thought that, at some point, I would like to resolve all of these types of problem in one fell swoop.”

FUJIFILM (China) valued ABeam’s outstanding knowledge of SAP ERP, and its driving force for improving the business processes of Japanese companies based in China

In order to achieve its three targets of optimizing business processes, accelerating decision-making, and facilitating personnel changes, FUJIFILM (China) began considering strategies at the start of 2014. The company requested cooperation and received proposals from three companies. After comparing the contents of these proposals, FUJIFILM (China) decided to go with ABeam Consulting (hereinafter “ABeam”).

As to why FUJIFILM (China) chose ABeam, Guo Bin, manager of the FUJIFILM (China) Business Process Reform Promotion Division and manager of the China IT Center, explained: “ABeam had a deep knowledge of SAP ERP and, by utilizing an industry framework, we could expect our business processes to improve in a short timeframe, even in China. In addition, they had an established methodology for reaching Operational Excellence by reforming our business processes while optimizing our use of the system—we felt that this was an extremely feasible approach, and this was the primary reason we opted for ABeam.”
“The project leader was Japanese but fluent in Chinese as well,” added Tsuji. “Consequently, we thought that he would be able to communicate smoothly with our staff—this was of great importance to us. In addition, we were also extremely impressed by the fact that ABeam made proposals not only for improving our business processes, but also for continuing to firmly establish the use of new standardized business processes.”

How can FUJIFILM (China) identify all the problems in its business processes?

When FUJIFILM (China) set about improving its business processes, it understood each of the issues it had in isolation. However, if the company had catered separately to each individual event, it would not have been able to drastically resolve the fundamental problems. FUJIFILM (China) not only wanted to ask why its system functions and processes operations were being carried out in this way, but also wanted to grasp and analyze its business rules and organizational structure in a multifaceted manner, and comprehensively investigate the root causes of its problems. It was necessary to do this first before drawing up fundamental countermeasures. But how should it proceed with this series of related initiatives? FUJIFILM (China) began the project by considering what approach it should take.
Tsuji recalls: “The first step of the project was to clarify how we should identify the problems in the business processes of our entire company, and what approach we should take.”
Regarding FUJIFILM (China)’s awareness of the problems it faced at that time, Guo commented: “Back then, we used SAP ERP as an output tool for financial statements. Daily business communications were managed on paper and, data was entered into SAP ERP by hand after business transactions are made. However, this did not maximize the potential of our computer network—it was merely a digitization of the data. We had to redefine our approach to SAP ERP if we wanted to use the system to improve our business processes—and this was the reason we implemented it in the first place.”
FUJIFILM (China) wanted to extract the full potential from its SAP ERP system, and reform and optimize its business processes. Moreover, the company wanted to visualize its management data and facilitate decision-making based on facts. By doing this, the company would for the first time be able to reap a return on its investment in the SAP ERP system. In order to achieve these aims, FUJIFILM (China) turned to the ABeam Method, which promotes business process improvements using an integrated, threefold approach of organization, business processes, and IT. 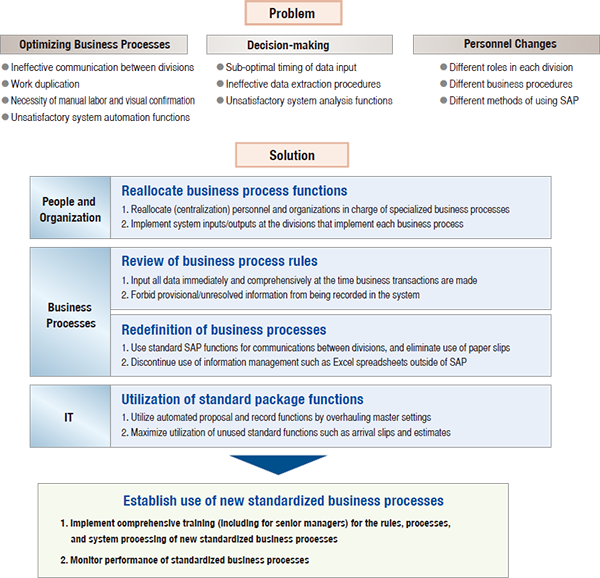 The business processes improvement project was implemented in three fundamental phases. In phase one, which lasted for approximately three months beginning in October 2014, FUJIFILM (China) identified its problems and causes and considered various reform policies. In phase two, which lasted for five months or so from January 2015, the company operated a pilot scheme at two business divisions in which it carried out the design, implementation and establishment of business processes, organization and IT, based on the reform policies considered in phase one. In phase three, which took place between May and October 2015, the reform policies were rolled out horizontally to all the company’s business divisions.
In concrete terms, the reforms began with all members agreeing at the start of the project to the principle that “system processing would take place at the divisions which generated the business processes.” On top of this, business processes were broken down into different functions. These functions were then redistributed to the appropriate divisions in accordance with their principles, and the role and organizational system of the divisions were overhauled based on this redistribution. As a result, FUJIFILM (China) concluded that changes to its organization would be necessary to successfully carry out its business process reforms. It was decided that operational support business processes that were shared by all business divisions should be identified, and a dedicated Commercial Operations Division should be newly established to centrally manage these processes.
Based on the assumption that this new division would be established, FUJIFILM (China) promoted the standardization and optimization of its operations through the approach of processes, rules and IT.
In order to achieve standardization, the company organized the business processes that were shared by all its divisions, and also revised its rules. Rules were defined for basic processes such as the frequency with which order records, quantities, and delivery dates were updated. Rules were also established for SAP functions which were used in every type of business process, including the procurement of sample products and film cutting processes.

FUJIFILM (China) succeeds in reducing its workload by 750 hours per month, and aims to further visualize their data

The business processes improvement project led to the eradication of the revisions and work duplication that burdened the people in charge, and also resulted in smoother cooperation between different divisions. In total, the workload at FUJIFILM (China) was reduced by 750 hours per month.
Tsuji explained: “Previously, we used paper slips for internal communications, and decision-making at the workplace took an extremely long time. The new business processes have reduced our workload and, at the same time, significantly improved the efficiency of communications between our divisions. In addition, by using groupware to share information, we have managed to eliminate all internal use of paper slips, except for invoices to our partner companies.”

The company’s second aim of “accelerating decision-making” was achieved by inputting data as soon as it is generated. Payment slips are now recorded and revised according to the rules, and the status quo of each business process is updated on the system in a timely manner. This has enabled the data to be utilized in management decision-making.

In the future, FUJIFILM (China) intends to effectively use the data, which is now of higher quality, so that it can further contribute to management decision-making. “We are considering using the BI system to analyze procurement, sales, inventory and daily sales data in real time,” said Tsuji.